One particular material that is gaining popularity in Canada and the United States is Baltic Birch plywood. Compared to many other types, it is naturally more durable. Aesthetically, it has a uniform face – depending on the grade. These are among the qualities that piqued the interest of cabinet and furniture makers. Even though Baltic Birch costs a little bit higher than regular ones, the advantages and benefits it provides are worth so much more.

What Is Baltic Birch Plywood?

The standard panel size of plywood is 1220 x 2440 mm (4 x 8 feet) in Canada. Although Baltic Birch plywood also comes in the same size, the most common panels measure 1525 x 1525 mm (5 x 5 feet). The odd dimension is a dead giveaway to its origin. It is sometimes called Russian Birch mainly due to being produced from trees originating in Russia, Finland, Estonia, Latvia, Lithuania, and other parts of the Eastern European Baltic Sea region.

Baltic Birch plywood, made exclusively of thin sheets of birch veneer, has more plies than regular ones. Each layer of birch wood has the same thickness, is compressed and cross-banded together. The unique manufacturing process eliminates the use of softwood or filler plies. Furthermore, there is no void in the core. These are among the reasons why it is superior to regular plywood.

The face and back veneers of Baltic Birch plywood is usually thicker than regular ones. As such, not only is it more durable but also less susceptible to sanding damage and chipping. Additionally, the edges are visually appealing and why some cabinet and furniture makers do not use edge bands. 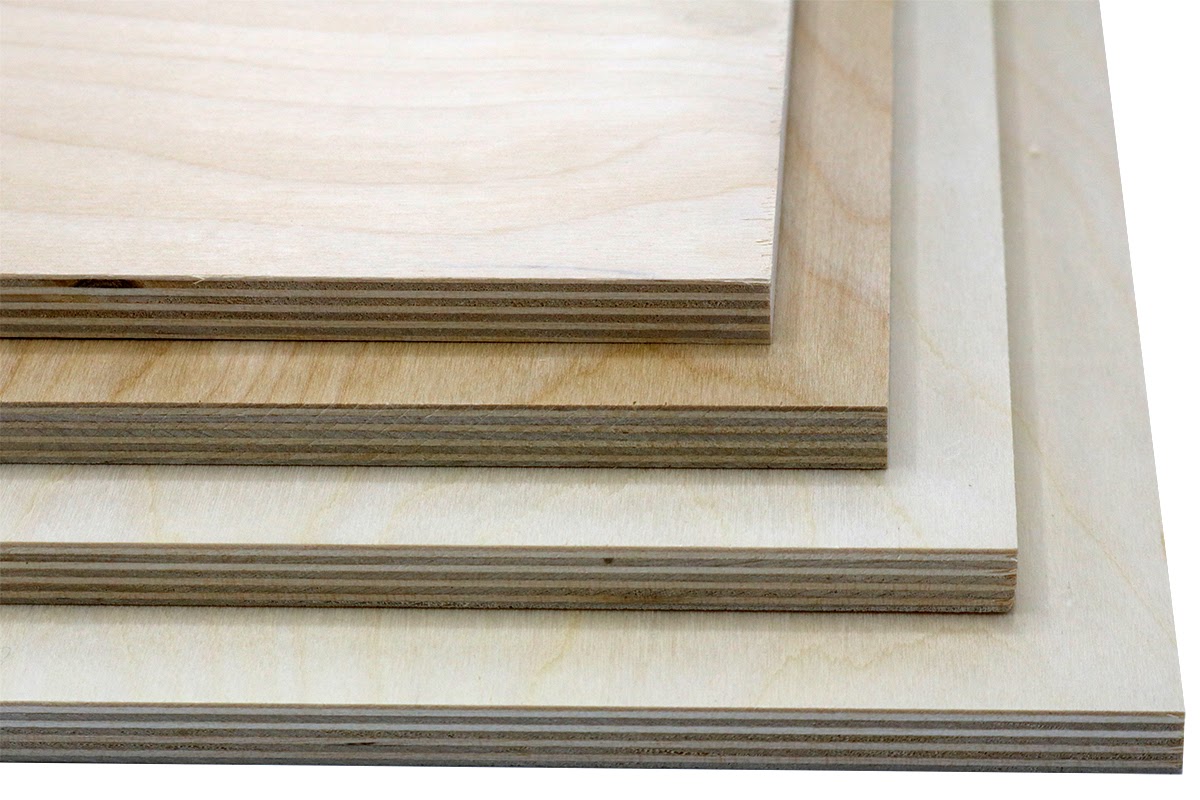 Although both have birch trees as the main component, there are fundamental differences that distinguish one from the other.

Baltic Birch plywood, for instance, has twice as many plies. A 3/4″ regular plywood usually would have 5 to 7 layers. Baltic Birch could have up to 13 layers.

Another distinction of significance is the material of the core. Instead of birch sheets, traditional veneer birch plywood only has birch sheets on the surface. Its interior is usually poplar or other hardwood species.

Birch trees are beautiful, durable, and can last long. However, that is not to say that no defects would appear during the manufacturing process.

The grading system mainly used for Russian Birch is the Intergovernmental Standard GOST 3916.1-96.

B. There is a higher grade – A – which is no longer available. At present, B is the highest grade available commercially. It has a near-flawless surface that is almost, not entirely, free of defects and no repairs. Only a little colour inconsistency and knots are allowed. B grade is the best choice for projects that prioritize aesthetics.

BB. This grade allows light mineral streaks, but the overall colour of the surface remains uniform. Minor repairs, cracks or splits, and knots are allowed. BB grade is still deemed as high-quality by most furniture and cabinet makers.

CP. Birch Tree plywood that falls under this grade can have unlimited plugs, slightly uneven colour consistency than BB, and more prevalent knots and other defects. It can have tight cracks but only limited wide splits. As such, most wood makers use it for laminating.

C. The C grade, also called the utility grade, has poor surface quality. It would have plenty of mineral streaks, inconsistent colour, prominent cracks and splits, and large knots.

You can use Birch Tree plywood for many projects ranging from hobbies and crafts to commercial and industrial applications.

What can you do?

For starters, you could build arts, decorations, racks, shelves, and wooden stands. Some people are more creative, crafting skateboards, model cars, ships, and planes. You can use it as a canvas for painting or use it for sculpture. For many wood lovers, its strength and durability make it ideal for furniture and kitchen cabinets. Go ahead if you want to build tables and chairs. It is not only visually gorgeous but also rigid.

In some projects that require the ability to hold screws, resistance to shock, Baltic Birch plywood is the preferred material. Moreover, you can do laser engravings without issues. Even lower grade sheets used for laminates, the superior quality of the core makes it less prone to water damage.

Why Baltic Birch Plywood Cost Is Worth It?

The cost of Baltic Birch plywood is higher than regular plywood and for several good reasons.

For projects that require screwing, Baltic Birch plywood is an excellent option, and there are two reasons.

As alluded to earlier, the core comprises twice as many layers as regular ones. Because of that and the adhesive used, the result is a more sturdy, flatter panel. Another distinction is that the core materials are exclusively birch ply instead of poplar or other cheaper alternatives. As such, you can fasten 100% of the screw threads – and not having voids/gaps ensure the integrity and long-term screw placements.

One of the issues concerning the use of regular sheets is the inability to produce clean joints. With Baltic Birch plywood, you can make fingers, dovetails, mitres, dados, and rabbets without issues. The consistency and compression that makes up the core and the surfaces reduce the chances of delimitation. There is no glue starvation nor voids to cause problems whatsoever. Even the face and back veneers would not chip, split, or break off when making machined joints.

Yet another concern of regular plywood – and any wood, for that matter – is warping and bowing. No, Baltic Birch plywood is not an exemption, but the way it is manufactured makes it resistant to disfigurement. Being void-free and comprising a higher number of layers, for sure, increases its strength and less prone.

In particular, thick panels – 1/2″ and 3/4″ – fare much better, even if used in large pieces. However, the think panels – 1/8″ and 1/4″ – might be a bit more susceptible. Ordinarily, it should not be a cause for concern as thin panels are usually used in applications where they are cut into smaller sizes.

For many people, buying regular plywood also means they have to pick up edge bands as well. There is not much choice here if the finished product requires the edges to look beautiful.

Birth Tree plywood, on the other hand, naturally look good. One of the steps during the manufacturing process is alternating the orientation of the inner plies that makes up the core. It results in edges that feature a distinct line pattern. You can shape, sand, and finish the edges without trouble – and they do look fantastic. Alternatively, you can also apply polyurethane or a clear lacquer topcoat on both the surface and the edges. Oil-based pigments and dyes are also suitable options.

The thickness of the face and back veneers of Baltic Birch plywood is noticeably thicker than regular ones. As such, they are not as prone to damages or being sanded through. For most applications, the recommended grade is BB/BB (which denotes the face and the back as single veneers with no additional splice).

6. Ideal for Laser Cutting and Engraving

For laser cutting, Baltic Birch plywood fares better than other materials. Of concern are 1/8″ and 1/4″ panels. Because of their thinness, they are more prone to warping. One way to offset that is to create a frame or jig to press the panel flat before cutting. As for 1/2″ and 3/4″, they are more than thick (and dense) enough to be cut with a laser without trouble.

Baltic Birch Plywood Cost Is Worth It

One could argue that using cheap sheets is more practical. However, that should also take into consideration the amount of work needed to produce finished products that look similar to Baltic Birch plywood. Not only would you need more finishing materials to match the appearance, but it would also involve so much more work and effort.

If that is not compelling enough, then look into the quality of the material itself. Having twice as many plies of birch tree sheets, 100% glue coverage, thick face and back veneers deliver exceptional strength, durability, and stability. Aesthetics aside, your finished product will – for sure – last long.

To answer the question – yes. The advantages of using Baltic Birch plywood and the benefits it provides is worth more than its price.